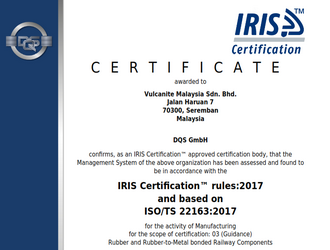 Vulcanite Malaysia was recently audited and IRIS certification based on ISO/TS 22163″2017 was granted for the activity of manufacturing rubber and rubber-to-metal bonded railway components. 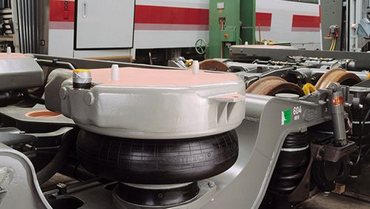 From the 1st June 2018 Vulcanite Australia, who are a 100% wholly owned subsidiary of Continental AG, will take over the responsibility for the supply of all ContiTech & Phoenix products including air spring systems, air spring bellows and all rubber to metal bonded primary & secondary suspension components for Rail OE and aftermarket use […]

Visit Vulcanite at AusRAIL Plus 2017

AusRAIL Plus 2017 will take place on 21-23 November 2017 at the Brisbane Exhibition and Convention Centre. Vulcanite will be exhibiting at Stand 129, so come along and say hello.

On October 9-11, Vulcanite will be exhibiting at the American Public Transportation Association (APTA) Expo in Atlanta, Georgia. Come down to our stand and say hello.

Vulcanite to Exhibit at CONEXPO 2017

Vulcanite to Exhibit at InnoTrans 2016

InnoTrans 2016 will take place on 20-23 September 2016 at the Berlin Exhibition Grounds, Messe Berlin. Come visit Vulcanite in Hall 9 at Stand 702.

Vulcanite, along with our joint venture partners Escorts Railway Products (India), will be exhibiting at the eleventh IREE 2015 exhibition from 14th -16th October 2015 at Pragati Maiden, New Delhi, India. This event will bring exhibitors and visitors from all over the world with the focus on the continuous modernisation and expansion of the Indian […]

Visit Vulcanite at Ausrail Plus 2015

Ausrail Plus 2015 will take place on 24-26 November 2015 at the Melbourne Convention and Exhibition Centre. Vulcanite will be displaying at Stand 641, so come along and say hello.

Vulcanite to Exhibit at Railtex 2015

Railtex is on again in 2015 and will be held at the National Exhibition Centre in Birmingham from 12th to 14th May 2015. Vulcanite will be displaying, so come along and meet us at Stand E34.

Vulcanite has signed a long-term licence agreement with Escorts Railway Products (ERP), a division of Escorts Group of India, for the manufacture and sale of Vulcanite rail products in India, Bangladesh, Pakistan and Sri Lanka. The Escorts Group is among India’s leading engineering conglomerates operating in the high growth sectors of agri-machinery, construction & material […]

The information provided is representative and is for reference only. Product properties are dependent on various factors including installation, environment and operating conditions. Vulcanite disclaims liability of any kind associated with the data herein provided. Please Contact Us if you require assistance or further details about a particular product.

Vulcanite exports globally and is looking for distributors worldwide. If you are interested in becoming a Vulcanite distributor, please go to Contact Us.